Veteran designer, Sandeep Khosla walks us through his latest collection for Gulabo by Abu Sandeep

Abu Jani Sandeep Khosla, a name synonymous with impeccable design, glamour immeasurable and fine Indian craftsmanship infused with European references, needs no introduction. In the business for over three decades now, their envy-inducing client roster reads like the opening credits of a multi-starrer blockbuster – the who’s who of Bollywood and beyond. On the occasion of their latest collection launch of Gulabo by Abu Sandeep on Nykaa Fashion, we sat down with one half of the legendary designer duo, Sandeep Khosla, to discuss everything from what went behind concocting the collection to where the inspiration stemmed from and here’s what we found…

What does Gulabo by Abu Sandeep stand for?

The label is named, Gulabo, as an ode to Waheeda Rehman’s character in the movie, Pyaasa. An iconic movie, with an iconic woman in the lead. Her integrity, her beauty, her sheer strength of character. And then her glorious whites she wore in the film. An absolute muse for us as artists and men.

What made you start this prêt line?

We began as Couturiers and have built a three-decade legacy and body of work focusing on Couture. In 2016 we launched a Diffusion label, Asal by Abu Sandeep. And by 2018, our creative juices led us towards prêt-á-porter. We believe in beauty, in originality, in fabulous design and quality at every price point. Gulabo was born from this desire and belief in putting the luxe into cotton and prêt. With Gulabo by Abu Sandeep we want to prove that prêt can be packed with punch and personality. That basic doesn’t have to be boring or commonplace. It can stand apart.

It’s a label which rejoices in the power of natural fabrics, of experimentation with silhouettes which are staples. We wanted to play with classics and make them hip, dramatic and full of attitude.  An attitude that spells personal style. It’s all about separates. Worn alone or together to create a whole gamut of ensembles. We have always believed in detailing. In using craft and technique and tailoring to make the extraordinary. There is nothing typical about a Gulabo piece. It makes a statement. You make a statement when you wear it.

What did the mood board for this collection look like?

It’s an entire journey, from day to night, from one mood to the next. It’s about the many personalities that combine to make the 21st century woman and putting the personal into her style. The collection and the label are all about taking classical, timeless silhouettes that are worn by every woman – from tops to shirts to kurtas and tunics, pants, dhotis, shararas and ghararas and infusing them with a distinct Abu Sandeep aura. God is in the detail. And Gulabo is all about original detailing. Whether it is the structure of the garment or the embroidery, applique which elevates it to glam. So we have dramatic elements like sleeves, ruffles, belts and scarf necklines. And then there are the gota accents in hip and funky avatars from kites to floral to applique. So the moods are many, but all flow and mix beautifully. You, the women decide what you combine together to create your own look. It’s putting the power where it belongs – with the wearer.

What would you say are some of the star styles from this collection?

Everything we create has to thrill us and shine bright if it is to make the final cut. We don’t compromise on that ever. We love the universality of these pieces, that they can be worn by any woman, in any part of the world, that they can take you from easy brunch to sun-downers, to festive occasions depending on which ensemble you choose and how you accessorize it.

Who do you see wearing these pieces? Who is a Gulabo by Abu Sandeep muse?

Woman is our Muse. And we don’t define or exclude what or who that woman is. Age no bar. Physicality no bar. Gulabo is meant for those who revel in life. Who celebrate the beauty of natural fabrics, of distinctive design. It’s a joyous, flirtatious, personality packed label. It is for everyone who enjoys easy, breezy, sassy style.

What would be your advice to emerging or established designers who would like to start their own prêt lines?

First and foremost, have your own story, your own vision, your own identity. Stick with it sans compromise. Create for yourselves, not an audience. Be original. Be zealous about quality. Great work gets noticed. Good design finds a market and lasts the test of time.

Discover the highlights from this collection: 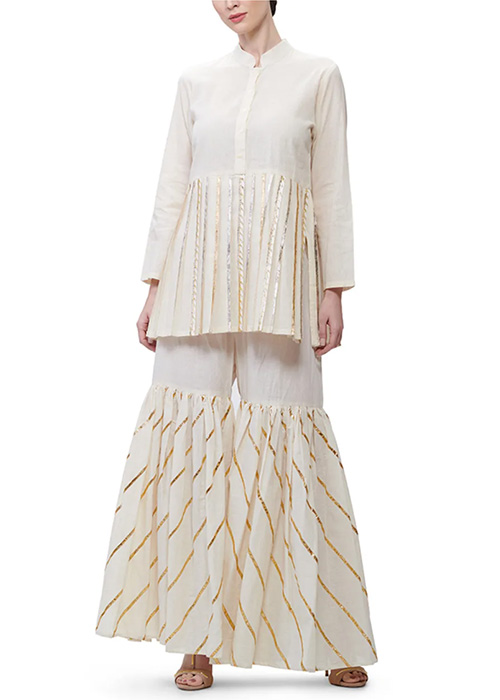